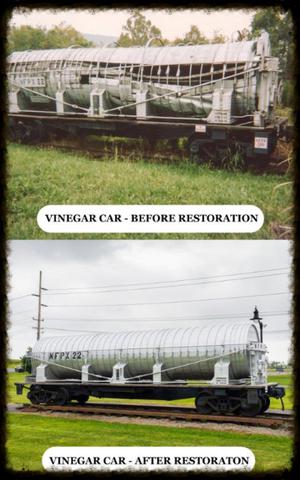 In July of 2005 the Winchester Chapter of the National Railway Historical Society donated to the Guilford Township Supervisors a wooded tank car used to haul vinegar, to be displayed at Norlo Park.  This "vinegar car" was set on the rails at Norlo Park March 30, 2006.  This section of track is 130 pound rail and was donated by the Norfolk Southern Railroad.  It was installed by Guilford Township employees in the same location as the right of way of the Mont Alto Railroad, originally completed in 1879 connecting Scotland and Waynesboro branch of the Cumberland Valley Railroad and subsequently part of the famous Pennsylvania Railroad.

The Cumberland Valley Railroad, under Colonel Moorhead Kennedy management, was innovative and one of the most financially successful railroads, paying a much higher dividend than the large railroads.  The railroad was a strong promoter of the fruit industry and there were over a million producing apple trees in Cumberland Valley.  Train loads of apples and peaches would run during season.  The railroad annually supplied the state agricultural department with an entire train free-of-charge to tour the Valley with experts to present exhibits and demonstrations on the best techniques in fruit culture.

The car was originally built in 1929 as a flat car and was purchased by National Fruit Products (N.F.P.) and outfitted with a tank in 1939.  N.F.P., a producer of apple products sold under the brand name White House Food Products, used the tank car to ship vinegar from its various apple processing facilities in the mid-atlantic region to the company's bottling plant in Winchester, VA.  The car was retired and donated to the Winchester Chapter of the National Railway Historical Society in 1972.  At that time the car was out of service and located at N.F.P.'s plant in Broadway, Virginia.  Winchester Chapter Director Dan Rolyson wrote a letter to the Southern Railway President, W. Graham Claytor, who allowed the car to be moved from Broadway, VA to Strasburg, VA.  The Winchester Chapter cosmetically restored the car several times at the site where it was displayed for over three decades, a side track at the Strasburg Museum, once the Southern Railway station in Strasburg.  Aware that Guilford Township was looking for historical railroad cars to display at Norlo Park, the Winchester Chapter donated the car knowing it would be restored and once again on public display.

The tank is 43' in length and is capable of holding 8,213 gallons of vinegar.  Silver paint was used on vinegar cars to reflect the sun's hot rays to keep the vinegar cool.

"One of three in America"

Existing websites and museum documentations indicate there are only two (2) other vinegar cars preserved in the United States.

The original tank on the car was dismantled in 2013.  In the fall and early 2014, Guilford Township employees constructed a new wooden tank using cypress wood.  The tank was constructed in Guilford Township's brick-ended barn, built in 1881.  On April 22, 2014, Dave's Truck Repair of Chambersburg loaded the tank onto a trailer at the barn along US 30 (also located in Norlo Park) and took about a half mile trip to its final resting place in Norlo Park.  Pictures below show how the tank was moved from the barn to the railroad tracks in Norlo Park.

The New Franklin Ruritan donated $2,000 toward the project, which used to purchase paint and various materials. 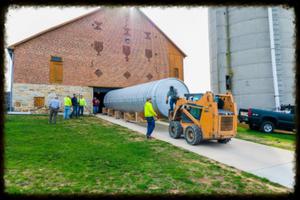 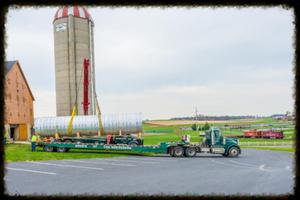 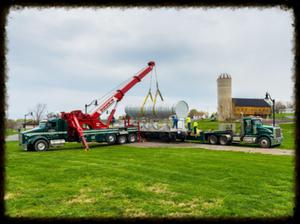 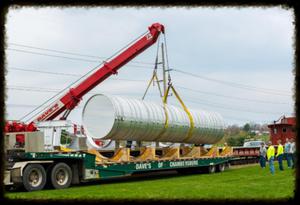 Quincy Station at Norlo Park: ​​Click on the link below for more pictures!